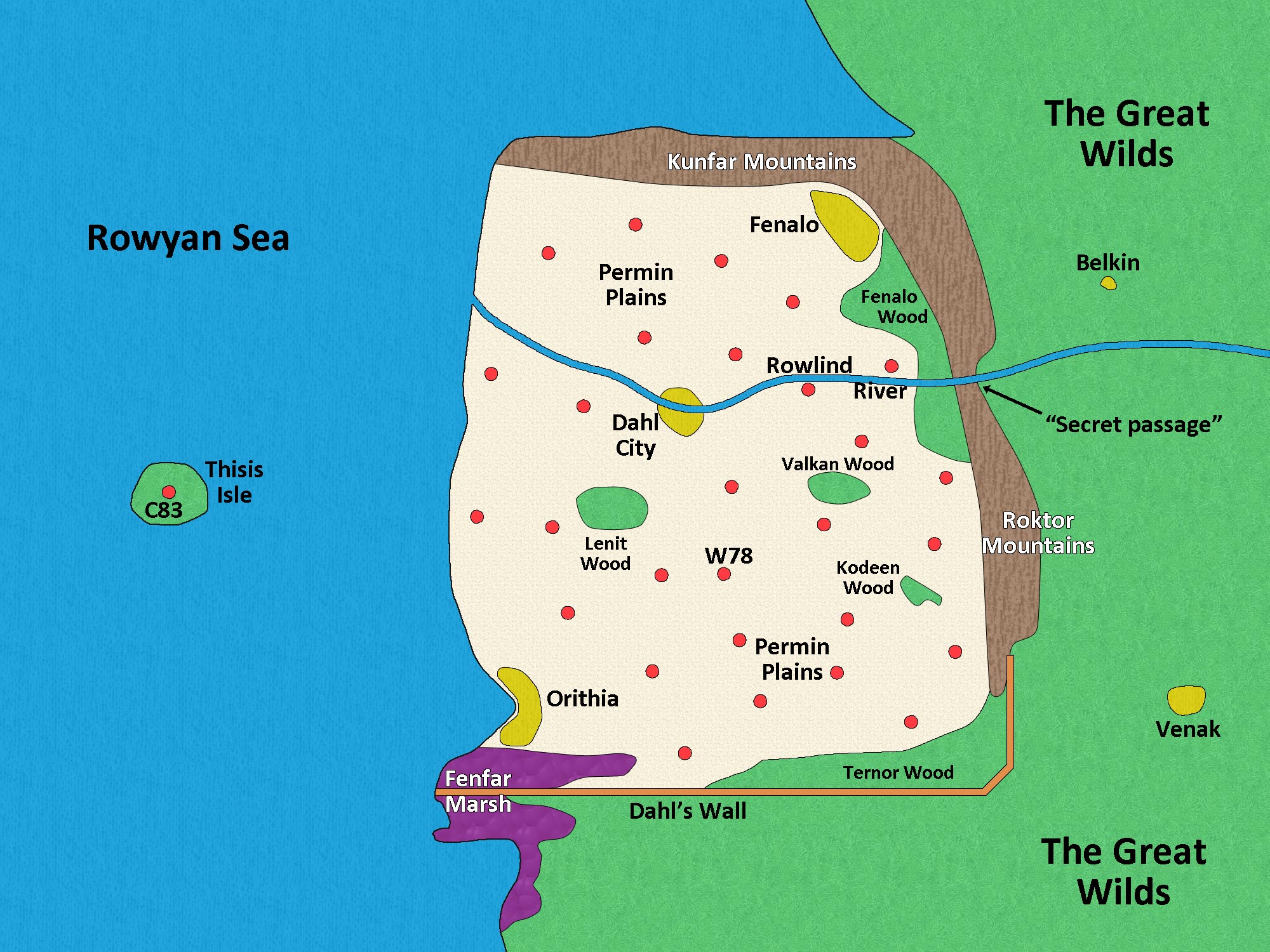 Photoshop map above. You don't have to thank me, but the pen tool and the layer fusion options of Photoshop. I made the cities relatively small, which makes the proportions look much better, and I added a few names in addition to those Flatline had in his original map. The forest zones within the wall and the mountains are called the "Woods", each with its name. The "secret passage" is actually a steep canyon formed by the river through the mountains, that separates the two mountain ranges. The source of the river is unknown. Belkin is the abandoned village of just a few wooden homes, too few to make it a camp, that will be the first Rebel refuge. I also picture here the Rebel meeting where Ziarn is brought to when she returns to Ormos and where she's anointed leader of the Rebellion. The red dots are the camps. W78 is Workcamp 78 and C83 is the Alcatraz-like Camp 83. I don't think I've added anything else by memory. Some of the names I added come from distorted Italian words, like Belkin from "ribelle" (Rebel), while others are random.

Because Ormos was split across philosophical and religious lines instead of racial ones, the cities have inhabitants of all races intermingling within them, although each city has its own majorities. Before the rise of Dahl, the plane had two major cities: the coastal city of Orithia and a city named Fenalo, that sits at the base of the Kunfar Mountains, being surrounded by them on two sides. These two cities are separated by the Permin Plains. Prior to Dahl’s reign, the Permin Plains had many small villages scattered throughout it. Since Dahl’s rise to power, most of these villages have been converted to Workcamps and Correction Camps, which has forced most of the population into the two major cities. Outside of these inhabited areas lies the Great Wilds, which was home to the largest village outside of the two main cites, the Elvish village of Venak. Venak was situated just within the borders of the Great Wilds, and was one of the very few settlements outside of the Permin Plains until Dahl forced its inhabitants to abandon it. The others were Thisis Isle, which was of great use to the Merfolk, who have since been made to live among the rest of their brothers, and Belkin, that was just a very small refuge for the few who dared adventuring into the Great Wilds. None of those adventurers has ever come back, so the Great Wilds themselves and what is behind them remains a mistery for the vast majority of Ormosians.

The Brotherhood has set up its most heinous camps, the ones it doesn’t want people to know about, in Venak and Thisis Isle. Camp 83, the worst Correction Camp on all Ormos, is on the island. Venak has been turned into a Zombie factory. Belkin wasn't worth being turned into a camp, as only a few wooden houses were there, and was abandoned instead. Now it has become the Rebellion’s first base of operations.

One of Dahl’s first actions as ruler was to build a great wall cutting the settlements of Ormos off from the Great Wilds. Father Dahl told his people he had constructed the wall as a way to keep them safe, but Dahl's real main purpose was to keep the Ormosian people confined to a smaller area, and thus easier to control. Also, most (but not all) of the devices of the Isolation Network are located in the Great Wilds. This was another good reason (from his point of view) for Dahl’s wall and his desire to make people fearful of the Great Wilds. This is also why Dahl has the Ratillions make Zombies to release them into the wilds as yet another deterrent (remember, they’re mindless Zombies). Venak is the place where Ratillion slaves create those Zombies.

Dahl also built another city in the very middle of the Permin Plains and established it as his main base. The city is appropriately named Dahl City. Here the last device of the Isolation Network is located, the one that Friegh and 137-F will destroy.

Main Races:
- Humans (almost all other creatures are seen in subordinate roles in Dahl City)