Sign In Register
2019 Holiday Exchange!
A New and Exciting Beginning
The End of an Era
Include Unconfirmed
Clear All
Legendary Creature - Human Soldier

T: Target opponent discards two cards. Activate this ability only during your turn, before attackers are declared. 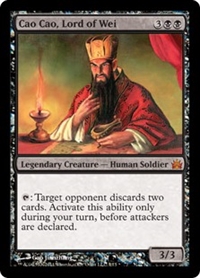 T: Search your library for a legendary card, reveal that card, and put it into your hand. Then shuffle your library. 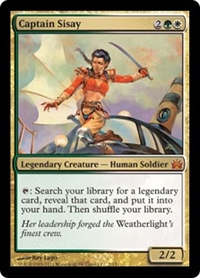 Each creature assigns combat damage equal to its toughness rather than its power.

"Each year that passes rings you inwardly with memory and might. Wield your heart, and the world will tremble." 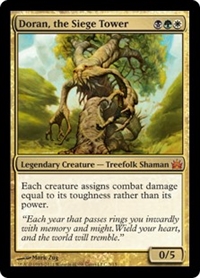 T: Create a token that's a copy of target nonlegendary creature you control. That token has haste. Sacrifice it at the beginning of the next end step. 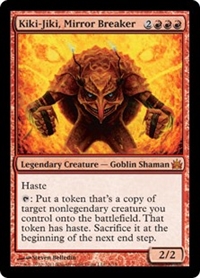 Whenever another creature dies, you may put X +1/+1 counters on Kresh the Bloodbraided, where X is that creature's power.

Each of his twenty-two braids is bound with bone and leather from a foe. 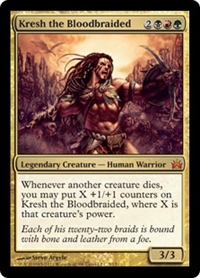 Mikaeus, the Lunarch enters the battlefield with X +1/+1 counters on it. 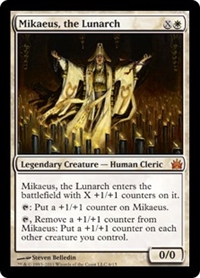 Omnath, Locus of Mana gets +1/+1 for each unspent green mana you have.

It gathers against the coming storm. 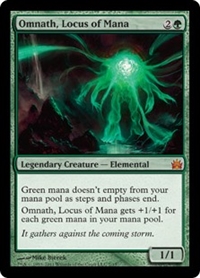 X(U/B): Choose a color. Target opponent exiles the top X cards of their library. For each card of the chosen color exiled this way, create a 1/1 blue and black Faerie Rogue creature token with flying. 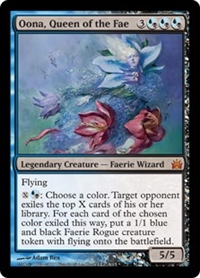 If Progenitus would be put into a graveyard from anywhere, reveal Progenitus and shuffle it into its owner's library instead.

The Soul of the World has returned. 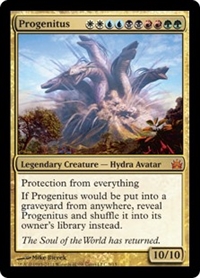 Exalted (Whenever a creature you control attacks alone, that creature gets +1/+1 until end of turn.)

Whenever a creature you control attacks alone, it gains double strike until end of turn.

Many sigils, one purpose. 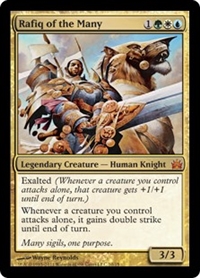 To gain audience with the hegemon, one must bring a riddle she has not heard. 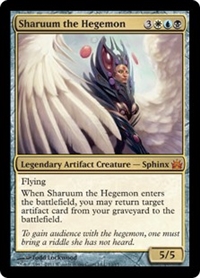 "One score and four he reigned, the Southland king: / A dragon coiled, a tiger poised below the mighty Yangtze." 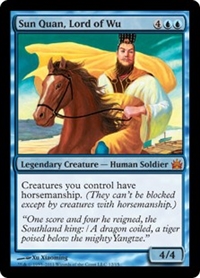 Flash (You may cast this spell any time you could cast an instant.)

Creature cards you own that aren't on the battlefield have flash.

Each opponent can cast spells only any time they could cast a sorcery.

To save this plane, he must forsake all others. 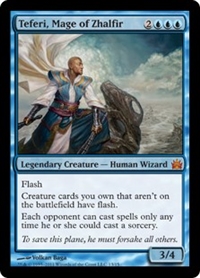 When you cast this spell, destroy target permanent.

When Ulamog, the Infinite Gyre is put into a graveyard from anywhere, its owner shuffles their graveyard into their library. 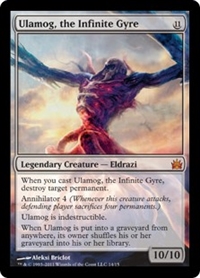 "My eyes are my strongest feature." 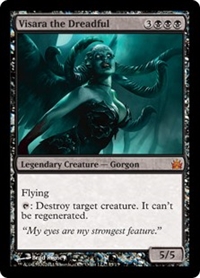