+1: Exile the top card of your library. You may cast that card. If you don't, Chandra, Torch of Defiance deals 2 damage to each opponent.

−7: You get an emblem with "Whenever you cast a spell, this emblem deals 5 damage to any target." 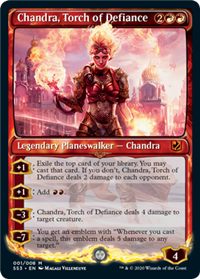 As an additional cost to cast this spell, discard two cards.

The chasm of years and worlds collapsed under the power of their embrace. 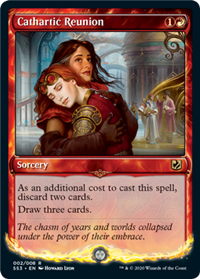 Choose three. You may choose the same mode more than once. 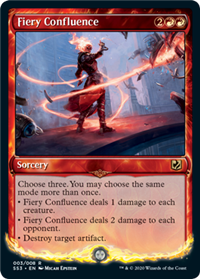 Each instant and sorcery card in your graveyard gains flashback until end of turn. The flashback cost is equal to its mana cost. 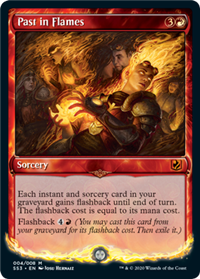 • Counter target spell if it's blue.

• Destroy target permanent if it's blue.

"Told you it would melt." 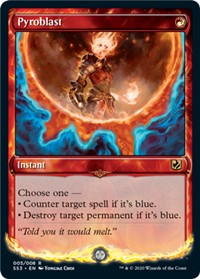 Whenever you cast an instant or sorcery spell that has the same name as a card in your graveyard, you may put a quest counter on Pyromancer Ascension.

Whenever you cast an instant or sorcery spell while Pyromancer Ascension has two or more quest counters on it, you may copy that spell. You may choose new targets for the copy. 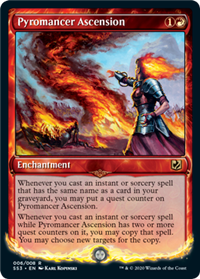 Add RR, then add R for each card named Rite of Flame in each graveyard.

As the flames engulfed her, Chandra opened her heart and offered up her greatest regrets to be consumed by the inferno.

Whenever you cast an instant or sorcery spell, create a 1/1 red Elemental creature token.

Immolation is the sincerest form of flattery. 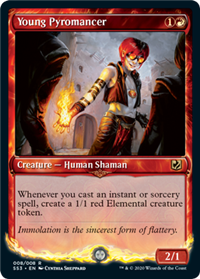