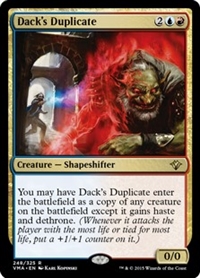 You may have Dack's Duplicate enter the battlefield as a copy of any creature on the battlefield, except it gains haste and dethrone. (Whenever it attacks the player with the most life or tied for most life, put a +1/+1 counter on it.)