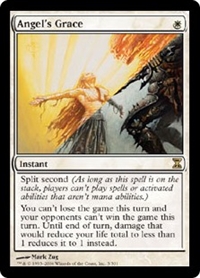 Split second (As long as this spell is on the stack, players can't cast spells or activate abilities that aren't mana abilities.)