Sign In Register
2019 Holiday Exchange!
A New and Exciting Beginning
The End of an Era
Avg Price $11.75
Buy on TCGPlayer
​ 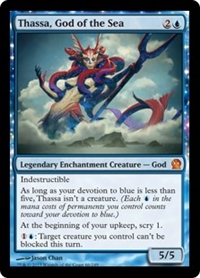 At the beginning of your upkeep, scry 1.

1U: Target creature you control can't be blocked this turn.

9/15/2013 Activating Thassa’s last ability after the target creature has been blocked won’t change or undo the block.
9/15/2013 Numeric mana symbols (, , and so on) in mana costs of permanents you control don’t count toward your devotion to any color.
9/15/2013 Mana symbols in the text boxes of permanents you control don’t count toward your devotion to any color.
9/15/2013 Hybrid mana symbols, monocolored hybrid mana symbols, and Phyrexian mana symbols do count toward your devotion to their color(s).
9/15/2013 If an activated ability or triggered ability has an effect that depends on your devotion to a color, you count the number of mana symbols of that color among the mana costs of permanents you control as the ability resolves. The permanent with that ability will be counted if it’s still on the battlefield at that time.
9/15/2013 When you scry, you may put all the cards you look at back on top of your library, you may put all of those cards on the bottom of your library, or you may put some of those cards on top and the rest of them on the bottom.
9/15/2013 You choose how to order cards returned to your library after scrying no matter where you put them.
9/15/2013 You perform the actions stated on a card in sequence. For some spells and abilities, that means you’ll scry last. For others, that means you’ll scry and then perform other actions.
9/15/2013 Scry appears on some spells and abilities with one or more targets. If all of the spell or ability’s targets are illegal when it tries to resolve, it won’t resolve and none of its effects will happen. You won’t scry.
9/15/2013 The type-changing ability that can make the God not be a creature functions only on the battlefield. It’s always a creature card in other zones, regardless of your devotion to its color.
9/15/2013 If a God enters the battlefield, your devotion to its color (including the mana symbols in the mana cost of the God itself) will determine if a creature entered the battlefield or not, for abilities that trigger whenever a creature enters the battlefield.
9/15/2013 If a God stops being a creature, it loses the type creature and all creature subtypes. It continues to be a legendary enchantment.
9/15/2013 The abilities of Gods function as long as they’re on the battlefield, regardless of whether they’re creatures.
9/15/2013 If a God is attacking or blocking and it stops being a creature, it will be removed from combat.
9/15/2013 If a God is dealt damage, then stops being a creature, then becomes a creature again later in the same turn, the damage will still be marked on it. This is also true for any effects that were affecting the God when it was originally a creature. (Note that in most cases, the damage marked on the God won’t matter because it has indestructible.)
Posts Quoted:
Reply
Clear All Quotes
Back to Top