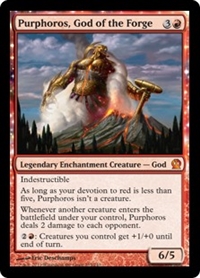 As long as your devotion to red is less than five, Purphoros isn't a creature.

Whenever another creature enters the battlefield under your control, Purphoros deals 2 damage to each opponent.