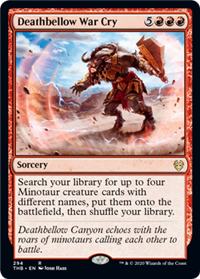 Search your library for up to four Minotaur creature cards with different names, put them onto the battlefield, then shuffle your library.

Posts Quoted:
Reply
Clear All Quotes
Back to Top