Sign In Register
2019 Holiday Exchange!
A New and Exciting Beginning
The End of an Era
Avg Price $2.25
Buy on TCGPlayer
​ 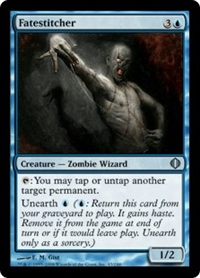 T: You may tap or untap another target permanent.

Unearth U (U: Return this card from your graveyard to the battlefield. It gains haste. Exile it at the beginning of the next end step or if it would leave the battlefield. Unearth only as a sorcery.)