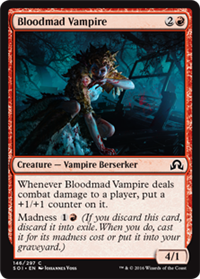 Whenever Bloodmad Vampire deals combat damage to a player, put a +1/+1 counter on it.

Madness 1R (If you discard this card, discard it into exile. When you do, cast it for its madness cost or put it into your graveyard.)