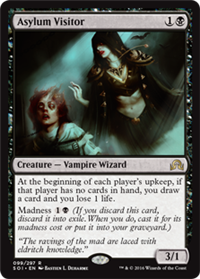 At the beginning of each player's upkeep, if that player has no cards in hand, you draw a card and you lose 1 life.

Madness 1B (If you discard this card, discard it into exile. When you do, cast it for its madness cost or put it into your graveyard.)

4/8/2016 The upkeep step is before the draw step, after the untap step. Asylum Visitor’s first ability will trigger and resolve before the active player draws a card in their draw step if that player has no cards in hand.
4/8/2016 Asylum Visitor’s triggered ability checks the active player’s hand as the upkeep begins and as the trigger resolves. If that player has a card in hand as it resolves, you won’t draw a card or lose 1 life. Notably, if you control multiple Asylum Visitors during your upkeep, whichever one’s first ability resolves first will stop the other’s first ability from having any effect unless you have a way to get the card you drew out of your hand before it resolves.
4/8/2016 On an opponent’s turn, triggered abilities you control will resolve before any triggered abilities of permanents that opponent controls if they trigger at the same time. This means that if you and your opponent each control an Asylum Visitor during your opponent’s upkeep, and they have no cards in hand, you’ll always draw a card before your opponent has a card in their hand.
4/8/2016 Cards are discarded in a Magic game only from a player’s hand. Effects that put cards from a player’s library into that player’s graveyard do not cause those cards to be discarded.
4/8/2016 A spell cast for its madness cost is put onto the stack like any other spell. It can be countered, copied, and so on. As it resolves, it’s put onto the battlefield if it’s a permanent card or into its owner’s graveyard if it’s an instant or sorcery card.
4/8/2016 Casting a spell for its madness cost doesn’t change its mana cost or its converted mana cost. You just pay the madness cost instead.
4/8/2016 Effects that cause you to pay more or less for a spell will cause you to pay that much more or less for its madness cost, too.
4/8/2016 Madness works independently of why you’re discarding the card. You could discard it to pay a cost, because a spell or ability tells you to, or even because you have too many cards in your hand at the end of your turn. You can’t discard a card with madness just because you want to, though.
4/8/2016 When you cast a card with madness, it was still discarded. If it was discarded to pay a cost, that cost is still paid. Abilities that trigger when a card is discarded will still trigger.
4/8/2016 If you choose not to cast a card with madness when the madness triggered ability resolves, it’s put into your graveyard. You don’t get another chance to cast it later.
4/8/2016 If you discard a card with madness to pay the cost of a spell or activated ability, that card’s madness trigger (and the spell that card becomes, if you choose to cast it) will resolve before the spell or ability the discard paid for.
4/8/2016 If you discard a card with madness while resolving a spell or ability, it moves immediately to exile. Continue resolving that spell or ability—the card is not in your graveyard at this time. Its madness trigger will be placed onto the stack once that spell or ability has completely resolved.
Posts Quoted:
Reply
Clear All Quotes
Back to Top