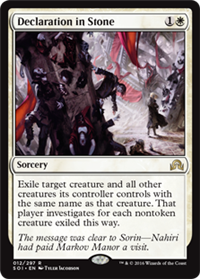 Exile target creature and all other creatures its controller controls with the same name as that creature. That player investigates for each nontoken creature exiled this way.

4/8/2016 Declaration in Stone has only one target. The other creatures with that name aren’t targeted. For example, a creature with hexproof will be exiled if it has the same name as the target creature.
4/8/2016 If the target creature is an illegal target when Declaration in Stone tries to resolve, it won’t resolve and none of its effects will happen. No creatures will be exiled, including those with the same name as the target.
4/8/2016 It’s possible to have a creature and a noncreature permanent with the same name, such as two copies of the same land, one of which has become a land creature. Only creatures with that name are exiled by Declaration in Stone.
4/8/2016 A face-down creature, such as one cast with a megamorph ability from the Dragons of Tarkir set, has no name and can’t share a name with any other creatures.
4/8/2016 Unless a token is a copy, or unless specified by the effect that created it, a token’s name is the same as its subtypes at the time it was created.
4/8/2016 The token is named Clue and has the artifact subtype Clue. Clue isn’t a creature type.
4/8/2016 The tokens are normal artifacts. For example, they can be sacrificed to cast Angelic Purge or targeted by Root Out.
4/8/2016 If you sacrifice a Clue for another card’s cost or effect, such as that of Angelic Purge or Tamiyo’s Journal, you can’t also pay and sacrifice it to draw a card.
Posts Quoted:
Reply
Clear All Quotes
Back to Top