Sign In Register
2019 Holiday Exchange!
A New and Exciting Beginning
The End of an Era
Avg Price $0.42
Buy on TCGPlayer
​ 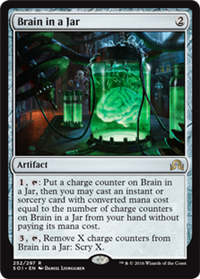 4/8/2016 When resolving the first ability of Brain in a Jar, the newly-placed charge counter will be counted when determining what spells you may cast. No player may take any action between you placing the counter and choosing which spell to cast.
4/8/2016 If Brain in a Jar leaves the battlefield before its first ability resolves, use the number of counters on it at the moment it left to determine what spell you may cast. That number won’t change because you can’t put a new counter on Brain in a Jar.
4/8/2016 If you cast a card “without paying its mana cost,” you can’t choose to cast it for any alternative costs, such as awaken costs. You can, however, pay additional costs, such as kicker costs. If the card has any mandatory additional costs, such as that of Lightning Axe, you must pay those to cast the card.
4/8/2016 If the card has in its mana cost, you must choose 0 as the value of X.
Posts Quoted:
Reply
Clear All Quotes
Back to Top