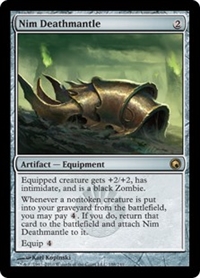 Equipped creature gets +2/+2, has intimidate, and is a black Zombie. (A creature with intimidate can't be blocked except by artifact creatures and/or creatures that share a color with it.)

Whenever a nontoken creature is put into your graveyard from the battlefield, you may pay 4. If you do, return that card to the battlefield and attach Nim Deathmantle to it.