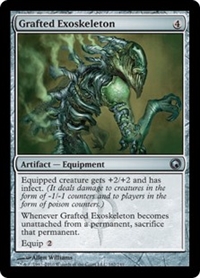 Whenever Grafted Exoskeleton becomes unattached from a permanent, sacrifice that permanent.