Sign In Register
2019 Holiday Exchange!
A New and Exciting Beginning
The End of an Era
Avg Price $13.03
Buy on TCGPlayer
​ 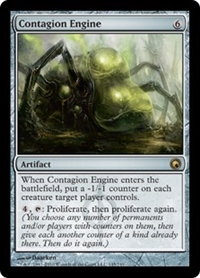 When Contagion Engine enters the battlefield, put a -1/-1 counter on each creature target player controls.

4, T: Proliferate, then proliferate again. (You choose any number of permanents and/or players with counters on them, then give each another counter of a kind already there. Then do it again.)

1/1/2011 You can choose any player that has a counter, including yourself.
1/1/2011 You can choose any permanent that has a counter, including ones controlled by opponents. You can’t choose cards in any zone other than the battlefield, even if they have counters on them, such as suspended cards or a Lightning Storm on the stack.
1/1/2011 You don’t have to choose every permanent or player that has a counter, only the ones you want to add another counter to. Since “any number” includes zero, you don’t have to choose any permanents at all, and you don’t have to choose any players at all.
1/1/2011 If a permanent chosen this way has multiple kinds of counters on it, only a single new counter is put on that permanent.
1/1/2011 Players can respond to the spell or ability whose effect includes proliferating. Once that spell or ability starts to resolve, however, and its controller chooses which permanents and players will get new counters, it’s too late for anyone to respond.
1/1/2011 As Contagion Engine’s activated ability resolves, you’ll complete an entire proliferate action, then you’ll complete a second proliferate action. You may choose different players and/or permanents, or different counters on those permanents, when you proliferate the second time.
1/1/2011 Players can’t respond between the first and the second proliferate actions.
Posts Quoted:
Reply
Clear All Quotes
Back to Top