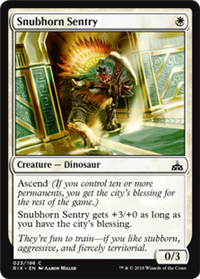 Snubhorn Sentry gets +3/+0 as long as you have the city's blessing.