Sign In Register
2019 Holiday Exchange!
A New and Exciting Beginning
The End of an Era
Avg Price $12.00
Buy on TCGPlayer
​ 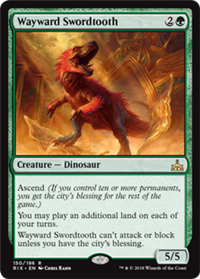 You may play an additional land on each of your turns.

Wayward Swordtooth can't attack or block unless you have the city's blessing.