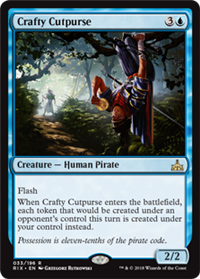 When Crafty Cutpurse enters the battlefield, each token that would be created under an opponent's control this turn is created under your control instead.