Sign In Register
2019 Holiday Exchange!
A New and Exciting Beginning
The End of an Era
Avg Price $2.99
Buy on TCGPlayer
​ 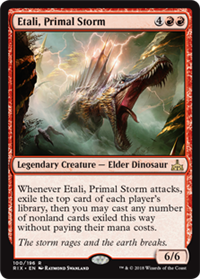 Whenever Etali, Primal Storm attacks, exile the top card of each player's library, then you may cast any number of nonland cards exiled this way without paying their mana costs.

1/19/2018 If an exiled card has in its mana cost, you must choose 0 as the value of X when casting it without paying its mana cost.
1/19/2018 If you cast any of the exiled cards, you do so as part of the resolution of the triggered ability. You can’t wait to cast them later in the turn. Timing permissions based on a card’s type are ignored, and the spells resolve before blockers are declared.
1/19/2018 If you cast more than one of the exiled cards, you choose the order in which to cast them. A spell you cast this way can be the target of a later spell you cast this way. However, permanent spells cast this way won’t resolve until you’re done casting spells, so the permanents they become can’t be the target of spells cast this way. For example, if you exile Twincast and Lightning Strike, you can cast Lightning Strike and then cast Twincast targeting it; but if you exile a creature card and an Aura card, you can’t cast that Aura targeting that creature.
1/19/2018 If you cast a card “without paying its mana cost,” you can’t pay any alternative costs. You can, however, pay additional costs. If the card has any mandatory additional costs, such as that of Silvergill Adept, those must be paid to cast the card.
1/19/2018 Any cards not cast, including land cards, remain in exile. They can’t be cast on later turns, even if Etali attacks again.
1/19/2018 Because all attacking creatures are chosen at once, a creature cast this way can’t attack during the same combat as Etali, even if it has haste.
1/19/2018 In a multiplayer game, if a player leaves the game, all cards that player owns leave as well. If you leave the game, any spells or permanents you control from Etali’s ability are exiled.
Posts Quoted:
Reply
Clear All Quotes
Back to Top