Sign In Register
2019 Holiday Exchange!
A New and Exciting Beginning
The End of an Era
Avg Price $0.51
Buy on TCGPlayer
​ 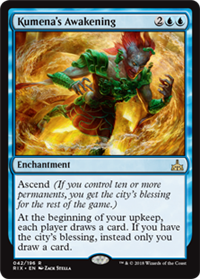 At the beginning of your upkeep, each player draws a card. If you have the city's blessing, instead only you draw a card.