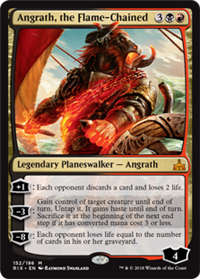 +1: Each opponent discards a card and loses 2 life.

−8: Each opponent loses life equal to the number of cards in their graveyard.

1/19/2018 Angrath’s first ability causes each opponent to lose 2 life even if some or all of those players were unable to discard a card.
1/19/2018 You can target and gain control of an untapped creature with Angrath’s second ability. You can also untap a creature you already control and give it haste.
1/19/2018 Whether the target creature has converted mana cost 3 or less is checked only as the delayed triggered ability from Angrath’s second ability resolves during the end step.
1/19/2018 In a Two-Headed Giant game, Angrath’s first ability causes the opposing team to lose 4 life, and each player on that team discards a card. His last ability causes the opposing team to lose life equal to the number of cards in both graveyards.
Posts Quoted:
Reply
Clear All Quotes
Back to Top