Sign In Register
2019 Holiday Exchange!
A New and Exciting Beginning
The End of an Era
Avg Price $11.95
Buy on TCGPlayer
​ 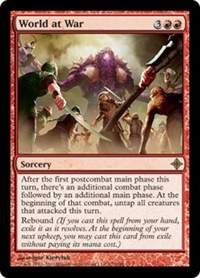 After the first postcombat main phase this turn, there's an additional combat phase followed by an additional main phase. At the beginning of that combat, untap all creatures that attacked this turn.

6/15/2010 If a spell with rebound that you cast from your hand doesn’t resolve for any reason (due being countered by a spell like Cancel, or because all of its targets are illegal), rebound has no effect. The spell is simply put into your graveyard. You won’t get to cast it again next turn.
6/15/2010 If you cast a spell with rebound from anywhere other than your hand (such as from your graveyard due to Sins of the Past, from your library due to cascade, or from your opponent’s hand due to Sen Triplets), rebound won’t have any effect. If you do cast it from your hand, rebound will work regardless of whether you paid its mana cost (for example, if you cast it from your hand due to Maelstrom Archangel).
6/15/2010 If a replacement effect would cause a spell with rebound that you cast from your hand to be put somewhere else instead of your graveyard (such as Leyline of the Void might), you choose whether to apply the rebound effect or the other effect as the spell resolves.
6/15/2010 Rebound will have no effect on copies of spells because you don’t cast them from your hand.
6/15/2010 If you cast a spell with rebound from your hand and it resolves, it isn’t put into your graveyard. Rather, it’s exiled directly from the stack. Effects that care about cards being put into your graveyard won’t do anything.
6/15/2010 At the beginning of your upkeep, all delayed triggered abilities created by rebound effects trigger. You may handle them in any order. If you want to cast a card this way, you do so as part of the resolution of its delayed triggered ability. Timing restrictions based on the card’s type (if it’s a sorcery) are ignored. Other restrictions are not (such as the one from Rule of Law).
6/15/2010 If you are unable to cast a card from exile this way, or you choose not to, nothing happens when the delayed triggered ability resolves. The card remains exiled for the rest of the game, and you won’t get another chance to cast the card. The same is true if the ability is countered (due to Stifle, perhaps).
6/15/2010 If you cast a card from exile this way, it will go to your graveyard when it resolves, fails to resolve, or is countered. It won’t go back to exile.
6/15/2010 As long as World at War resolves before the first postcombat main phase of a turn ends, it will have its full effect. That will happen in most cases, since it’s a sorcery (meaning it’s probably cast during the first or second main phase of a turn), and it has rebound (meaning it’ll be cast during your upkeep). If, however, it’s cast later than that, it won’t create any new phases. For example, if one World at War creates a second combat phase and a third main phase in a turn, then a second World at War is cast during that third main phase, no additional phases are created. The rebound effect still works, though.
6/15/2010 Multiple World at War effects are cumulative, as long as they’re cast early enough. The first one modifies the turn structure to this: beginning phase, precombat main phase, combat phase, postcombat main phase, [new combat phase], [new postcombat main phase], ending phase. Each subsequent one inserts another combat phase and main phase into the turn after the original postcombat main phase and before the newest combat phase.
6/15/2010 Unlike other similar cards (such as Relentless Assault), World at War doesn’t untap the creatures that have attacked this turn when it resolves. Rather, those creatures untap when the new combat phase created by the spell begins. All creatures that attacked this turn untap, regardless of which combat phase they attacked in (if there have been more than one) or who controls them (if you’re playing a Two-Headed Giant game, for example).
6/15/2010 You don’t have to attack with any creatures during the new combat phase.
Posts Quoted:
Reply
Clear All Quotes
Back to Top