Sign In Register
2019 Holiday Exchange!
A New and Exciting Beginning
The End of an Era
Avg Price $45.65
Buy on TCGPlayer
​ 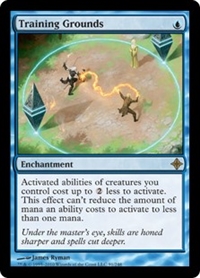 Activated abilities of creatures you control cost up to 2 less to activate. This effect can't reduce the amount of mana an ability costs to activate to less than one mana.