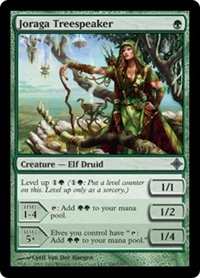 Level up 1G (1G: Put a level counter on this. Level up only as a sorcery.)

6/15/2010 The abilities a leveler grants to itself don’t overwrite any other abilities it may have. In particular, they don’t overwrite the creature’s level up ability; it always has that.
6/15/2010 Effects that set a leveler’s power or toughness to a specific value, including the effects from a level symbol’s ability, apply in timestamp order. The timestamp of each level symbol’s ability is the same as the timestamp of the leveler itself, regardless of when the most recent level counter was put on it.
6/15/2010 Effects that modify a leveler’s power or toughness, such as the effects of Giant Growth or Glorious Anthem, will apply to it no matter when they started to take effect. The same is true for counters that change the creature’s power or toughness (such as +1/+1 counters) and effects that switch its power and toughness.
6/15/2010 If another creature becomes a copy of a leveler, all of the leveler’s printed abilities — including those represented by level symbols — are copied. The current characteristics of the leveler, and the number of level counters on it, are not. The abilities, power, and toughness of the copy will be determined based on how many level counters are on the copy.
6/15/2010 A creature’s level is based on how many level counters it has on it, not how many times its level up ability has been activated or has resolved. If a leveler gets level counters due to some other effect (such as Clockspinning) or loses level counters for some reason (such as Vampire Hexmage), its level is changed accordingly.
6/15/2010 If Joraga Treespeaker is level 5 or greater, it grants the mana ability to each Elf you control, including itself.
Posts Quoted:
Reply
Clear All Quotes
Back to Top