Sign In Register
2019 Holiday Exchange!
A New and Exciting Beginning
The End of an Era
Avg Price $2.27
Buy on TCGPlayer
​ 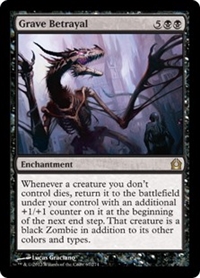 Whenever a creature you don't control dies, return it to the battlefield under your control with an additional +1/+1 counter on it at the beginning of the next end step. That creature is a black Zombie in addition to its other colors and types.

10/1/2012 Grave Betrayal doesn’t overwrite any previous colors or types. Rather, it adds another color and another creature type.
10/1/2012 If the creature is normally colorless, it will simply be black. It won’t be both black and colorless.
10/1/2012 If a creature you don’t control dies during the end step, that creature won’t return to the battlefield until the beginning of the next end step.
10/1/2012 Each creature you don’t control that dies causes a delayed triggered ability to trigger at the beginning of the next end step. If there are multiple such abilities, you can put them on the stack in any order. The creatures will return to the battlefield one at a time as each ability resolves. The last ability you put on the stack will be the first one to resolve.
10/1/2012 If the creature card leaves the graveyard before the delayed triggered ability resolves, it won’t return to the battlefield. This is also true if the card leaves the graveyard and returns to the graveyard before that ability resolves.
10/1/2012 The phrase “with an additional +1/+1 counter on it” means that the creature enters the battlefield with one more +1/+1 counter than it would normally enter the battlefield with. It doesn’t keep any counters it had on it when it died.
10/1/2012 In a multiplayer game, if more than one player controls a Grave Betrayal and a creature controlled by none of those players dies, each Grave Betrayal will create a delayed triggered ability at the beginning of the next end step. The first such ability to resolve will return the creature. Usually, this will be one controlled by the player furthest from the active player in turn order.
Posts Quoted:
Reply
Clear All Quotes
Back to Top