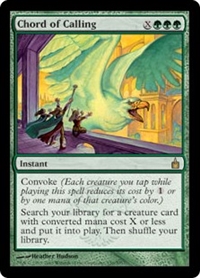 Search your library for a creature card with converted mana cost X or less and put it onto the battlefield. Then shuffle your library.