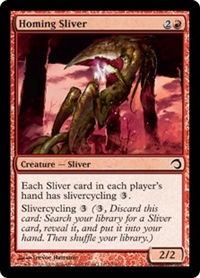 Each Sliver card in each player's hand has slivercycling 3.

Slivercycling 3 (3, Discard this card: Search your library for a Sliver card, reveal it, put it into your hand, then shuffle your library.)

2/1/2009 Unlike the normal cycling ability, Slivercycling doesn’t allow you to draw a card. Instead, it lets you search your library for a Sliver card. After you find a Sliver card in your library, you reveal it, put it into your hand, then shuffle your library.
2/1/2009 Slivercycling is a form of cycling. Any ability that triggers on a card being cycled also triggers on Slivercycling this card. Any ability that stops a cycling ability from being activated also stops Plainscycling from being activated.
2/1/2009 Slivercycling is an activated ability. Effects that interact with activated abilities (such as Stifle or Rings of Brighthearth) will interact with Slivercycling. Effects that interact with spells (such as Remove Soul or Faerie Tauntings) will not.
2/1/2009 You can choose to find any card with the Sliver creature type, even if it isn’t a creature card. This includes, for example, Tribal cards with the Changeling ability. You can also choose not to find a card, even if there is a Sliver card in your library.
7/1/2013 Abilities that Slivers grant, as well as power/toughness boosts, are cumulative. However, for some abilities, like flying, having more than one instance of the ability doesn’t provide any additional benefit.
7/1/2013 If the creature type of a Sliver changes so it’s no longer a Sliver, it will no longer be affected by its own ability. Its ability will continue to affect other Sliver creatures.
Posts Quoted:
Reply
Clear All Quotes
Back to Top