Sign In Register
2019 Holiday Exchange!
A New and Exciting Beginning
The End of an Era
Avg Price $7.00
Buy on TCGPlayer
​ 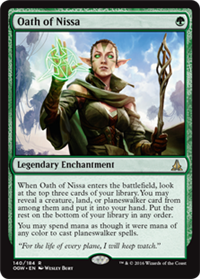 When Oath of Nissa enters the battlefield, look at the top three cards of your library. You may reveal a creature, land, or planeswalker card from among them and put it into your hand. Put the rest on the bottom of your library in any order.

You may spend mana as though it were mana of any color to cast planeswalker spells.

1/22/2016 Each of the Oaths is legendary: if you control more than one of any particular Oath, you choose one to remain on the battlefield and the others are put into your graveyard.
1/22/2016 The “legend rule” checks the full names of legendary permanents. You can control Oath of Gideon and Oath of Chandra at the same time, for example.
1/22/2016 Even if you control a particular Oath, you can cast another of that Oath to take advantage of its enters-the-battlefield ability. It will enter the battlefield, causing its first ability to trigger. You will then choose one to keep, as detailed above, and then its enters-the-battlefield ability will resolve.
Posts Quoted:
Reply
Clear All Quotes
Back to Top