Sign In Register
2019 Holiday Exchange!
A New and Exciting Beginning
The End of an Era
Avg Price $0.53
Buy on TCGPlayer
​ 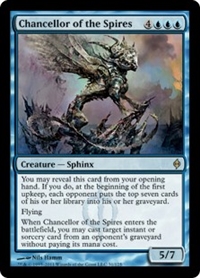 You may reveal this card from your opening hand. If you do, at the beginning of the first upkeep, each opponent puts the top seven cards of their library into their graveyard.

When Chancellor of the Spires enters the battlefield, you may cast target instant or sorcery card from an opponent's graveyard without paying its mana cost.

6/1/2011 If you reveal more than one Chancellor of the Spires from your opening hand, each opponent will put the top seven cards of their library into their graveyard that many times (for a total of fourteen, twenty-one, or twenty-eight cards).
6/1/2011 The instant or sorcery card you target with the enters-the-battlefield triggered ability is cast as part of the resolution of that ability. Timing restrictions based on the card’s type are ignored. Other restrictions, such as “Cast [this card] only during combat,” are not.
6/1/2011 If you are unable to cast the card, perhaps because there are no legal targets available, the card remains in its owner’s graveyard.
6/1/2011 You may pay additional costs, such as kicker costs, of the instant or sorcery card.
6/1/2011 If the card has any mandatory additional costs, then you must pay them in order to cast the spell.
6/8/2016 A player’s “opening hand” is the hand of cards the player has after all players have taken mulligans and “scryed” if applicable. If players have any cards in hand that allow actions to be taken with them from a player’s opening hand, the starting player takes all such actions first in any order, followed by each other player in turn order. Then the first turn begins.
Posts Quoted:
Reply
Clear All Quotes
Back to Top