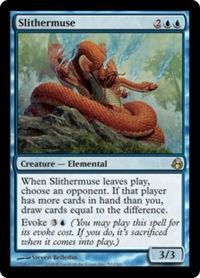 When Slithermuse leaves the battlefield, choose an opponent. If that player has more cards in hand than you, draw cards equal to the difference.

Evoke 3U (You may cast this spell for its evoke cost. If you do, it's sacrificed when it enters the battlefield.)

4/1/2008 Evoke doesn’t change the timing of when you can cast the creature that has it. If you could cast that creature spell only when you could cast a sorcery, the same is true for cast it with evoke.
4/1/2008 If a creature spell cast with evoke changes controllers before it enters the battlefield, it will still be sacrificed when it enters the battlefield. Similarly, if a creature cast with evoke changes controllers after it enters the battlefield but before its sacrifice ability resolves, it will still be sacrificed. In both cases, the controller of the creature at the time it left the battlefield will control its leaves-the-battlefield ability.
4/1/2008 When you cast a spell by paying its evoke cost, its mana cost doesn’t change. You just pay the evoke cost instead.
4/1/2008 Effects that cause you to pay more or less to cast a spell will cause you to pay that much more or less while casting it for its evoke cost, too. That’s because they affect the total cost of the spell, not its mana cost.
4/1/2008 Whether evoke’s sacrifice ability triggers when the creature enters the battlefield depends on whether the spell’s controller chose to pay the evoke cost, not whether they actually paid it (if it was reduced or otherwise altered by another ability, for example).
4/1/2008 If you’re casting a spell “without paying its mana cost,” you can’t use its evoke ability.
4/1/2008 You choose an opponent when the ability resolves. Once you determine how many more cards than you that player has, that number is locked in as the amount you’ll draw.
Posts Quoted:
Reply
Clear All Quotes
Back to Top