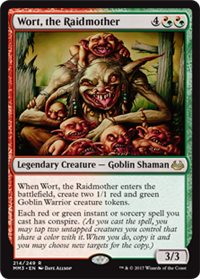 Each red or green instant or sorcery spell you cast has conspire. (As you cast the spell, you may tap two untapped creatures you control that share a color with it. When you do, copy it and you may choose new targets for the copy.)

3/14/2017 If a spell gains a second instance of conspire from Wort’s ability, you may choose to pay for one, both, or none of those abilities. Each conspire ability triggers only if you tap two creatures specifically for that ability.
3/14/2017 If the spell that’s copied is modal (that is, it says “Choose one —” or the like), the copy will have the same mode. A different mode can’t be chosen.
3/14/2017 If the spell that’s copied has an X whose value was determined as it was cast (like Bonfire of the Damned does), the copy will have the same value of X.
3/14/2017 If the spell has damage divided as it was cast (like Fiery Justice does), the division can’t be changed (although the targets receiving that damage still can).
3/14/2017 Some spells instruct you to sacrifice a creature as an additional cost to cast that spell. If you sacrifice Wort to pay that cost, that spell won’t have conspire at the moment it becomes cast, so conspire won’t trigger, even if you tapped two creatures.
3/14/2017 If you’re casting a spell for its flashback cost, you can’t pay another alternative cost (such as an overload cost or a Trap’s alternative cost) instead. You may pay additional costs, such as conspire.
Posts Quoted:
Reply
Clear All Quotes
Back to Top