Sign In Register
2019 Holiday Exchange!
A New and Exciting Beginning
The End of an Era
Avg Price $3.65
Buy on TCGPlayer
​ 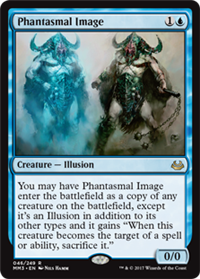 You may have Phantasmal Image enter the battlefield as a copy of any creature on the battlefield, except it's an Illusion in addition to its other types and it gains "When this creature becomes the target of a spell or ability, sacrifice it."