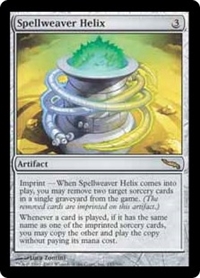 Imprint — When Spellweaver Helix enters the battlefield, you may exile two target sorcery cards from a single graveyard.

Whenever a player casts a card, if it has the same name as one of the cards exiled with Spellweaver Helix, you may copy the other. If you do, you may cast the copy without paying its mana cost.

10/4/2004 If the imprinted card leaves the exile zone while the ability to make a copy is on the stack, then no copy will be made.
10/4/2004 If this card leaves the battlefield while the ability to make a copy is on the stack, the ability will still make a copy using the last-known-information rule.
12/1/2004 If there’s only one imprinted sorcery card, nothing happens.
12/1/2004 If the two imprinted sorcery cards have the same name and a card with that name is cast, only one copy is created, not two.
12/1/2004 Spellweaver Helix’s second ability creates a copy of the imprinted card in the Exile zone (that’s where the imprinted sorcery card is), then allows you to cast it without paying its mana cost.
12/1/2004 You cast the copy while this ability is resolving, and still on the stack. Normally, you’re not allowed to cast spells or activate abilities at this time. Spellweaver Helix’s ability breaks this rule. (The card that triggered this ability is also still on the stack.)
12/1/2004 You don’t pay the spell’s mana cost. If a spell has X in its mana cost, X is 0. You do pay any additional costs for that spell. You can’t use any alternative costs.
12/1/2004 You can’t cast the copy if an effect prevents you from casting sorceries or from casting that particular sorcery.
12/1/2004 You can’t cast the copy unless all of its targets can be chosen.
12/1/2004 If you don’t want to cast the copy, you can choose not to; the copy ceases to exist the next time state-based actions are checked.
3/1/2005 The creation of the copy and then the casting of the copy are both optional.
4/18/2017 A split card has the same name as a spell if either of its names is that spell’s name.
Posts Quoted:
Reply
Clear All Quotes
Back to Top