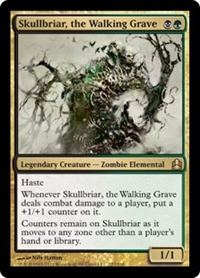 Whenever Skullbriar, the Walking Grave deals combat damage to a player, put a +1/+1 counter on it.

Counters remain on Skullbriar as it moves to any zone other than a player's hand or library.