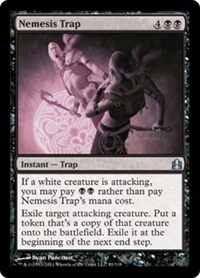 If a white creature is attacking, you may pay BB rather than pay this spell's mana cost.

Exile target attacking creature. Create a token that's a copy of that creature. Exile it at the beginning of the next end step.