Sign In Register
2019 Holiday Exchange!
A New and Exciting Beginning
The End of an Era
Avg Price $0.56
Buy on TCGPlayer
​ 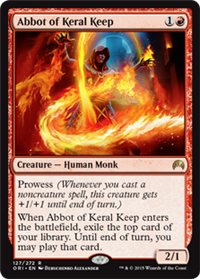 Prowess (Whenever you cast a noncreature spell, this creature gets +1/+1 until end of turn.)

When Abbot of Keral Keep enters the battlefield, exile the top card of your library. Until end of turn, you may play that card.

6/22/2015 The card exiled by Abbot of Keral Keep’s ability is exiled face up.
6/22/2015 You may play that card that turn even if Abbot of Keral Keep is no longer on the battlefield or under your control.
6/22/2015 Playing the card exiled with Abbot of Keral Keep’s ability follows the normal rules for playing that card. You must pay its costs, and you must follow all applicable timing rules. For example, if the card is a creature card, you can cast that card by paying its mana cost only during your main phase while the stack is empty.
6/22/2015 Unless an effect allows you to play additional lands that turn, you can play a land card exiled with Abbot of Keral Keep’s ability only if you haven’t played a land yet that turn.
6/22/2015 If you don’t play the card, it will remain exiled.
6/22/2015 Any spell you cast that doesn’t have the type creature will cause prowess to trigger. If a spell has multiple types, and one of those types is creature (such as an artifact creature), casting it won’t cause prowess to trigger. Playing a land also won’t cause prowess to trigger.
6/22/2015 Prowess goes on the stack on top of the spell that caused it to trigger. It will resolve before that spell.
6/22/2015 Once it triggers, prowess isn’t connected to the spell that caused it to trigger. If that spell is countered, prowess will still resolve.
Posts Quoted:
Reply
Clear All Quotes
Back to Top