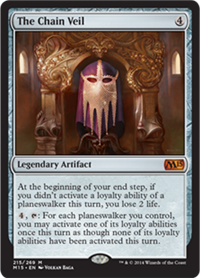 At the beginning of your end step, if you didn't activate a loyalty ability of a planeswalker this turn, you lose 2 life.