Sign In Register
2019 Holiday Exchange!
A New and Exciting Beginning
The End of an Era
Avg Price $1.56
Buy on TCGPlayer
​ 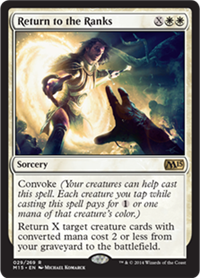 Return X target creature cards with converted mana cost 2 or less from your graveyard to the battlefield.