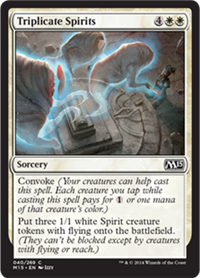 Create three 1/1 white Spirit creature tokens with flying. (They can't be blocked except by creatures with flying or reach.)