Sign In Register
2019 Holiday Exchange!
A New and Exciting Beginning
The End of an Era
Avg Price $1.95
Buy on TCGPlayer
​ 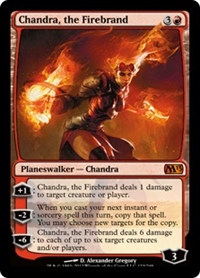 +1: Chandra, the Firebrand deals 1 damage to any target.

−2: When you cast your next instant or sorcery spell this turn, copy that spell. You may choose new targets for the copy.

−6: Chandra, the Firebrand deals 6 damage to each of up to six targets.

9/22/2011 Chandra’s second ability creates a delayed triggered ability that will copy the next instant or sorcery spell you cast that turn, regardless of whether that spell has targets.
9/22/2011 When the delayed trigger resolves, it creates a copy of a spell. You control the copy. That copy is created on the stack, so it’s not “cast.” Abilities that trigger when a player casts a spell won’t trigger. The copy will then resolve like a normal spell, after players get a chance to cast spells and activate abilities.
9/22/2011 The copy will have the same targets as the spell it’s copying unless you choose new ones. You may change any number of the targets, including all of them or none of them. If, for one of the targets, you can’t choose a new legal target, then it remains unchanged (even if the current target is illegal).
9/22/2011 If the spell Chandra copies is modal (that is, it says “Choose one —” or the like), the copy will have the same mode. You can’t choose a different one.
9/22/2011 If the spell Chandra copies has an X whose value was determined as it was cast (like Consume Spirit does), the copy has the same value of X.
9/22/2011 You can’t choose to pay any additional costs for the copy. However, effects based on any additional costs that were paid for the original spell are copied as though those same costs were paid for the copy too. For example, if you sacrifice a 3/3 creature to cast Fling after activating Chandra’s second ability, the copy of Fling will also deal 3 damage.
9/22/2011 When you activate Chandra’s last ability, you choose up to six target creatures and/or players. No damage is divided, and Chandra can’t deal more than 6 damage to any one target. Chandra deals 6 damage to each target that is still legal when the ability resolves.
Posts Quoted:
Reply
Clear All Quotes
Back to Top