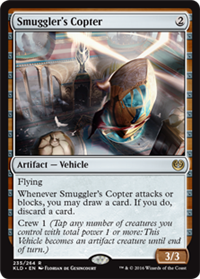 Whenever Smuggler's Copter attacks or blocks, you may draw a card. If you do, discard a card.

Crew 1 (Tap any number of creatures you control with total power 1 or more: This Vehicle becomes an artifact creature until end of turn.)