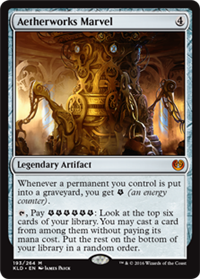 Whenever a permanent you control is put into a graveyard, you get EnERGy (an energy counter).

9/20/2016 Aetherworks Marvel’s first ability triggers whenever any permanent you control is put into a graveyard from the battlefield, including Aetherworks Marvel itself and other permanents put into a graveyard at the same time as it.
9/20/2016 Tokens that are sacrificed or destroyed are put into their owner’s graveyard before ceasing to exist. If you controlled the token, Aetherworks Marvel’s first ability will trigger.
9/20/2016 The card cast with Aetherworks Marvel’s second ability is cast from your library.
9/20/2016 If you cast a card “without paying its mana cost,” you can’t choose to cast it for any alternative costs, such as emerge costs. You can, however, pay additional costs. If the card has any mandatory additional costs, such as that of Incendiary Sabotage, you must pay those to cast the card.
9/20/2016 If the card has in its mana cost, you must choose 0 as the value of X when casting it without paying its mana cost.
2/9/2017 is the energy symbol. It represents one energy counter.
2/9/2017 Energy counters are a kind of counter that a player may have. They’re not associated with specific permanents. (Other kinds of counters that players may have include poison and experience.)
2/9/2017 Keep careful track of how many energy counters each player has. You may do so by keeping a running count on paper, by using a die, or by any other clear and mutually agreeable method.
2/9/2017 If an effect says you get one or more , you get that many energy counters. To pay one or more , you lose that many energy counters. Any effects that interact with counters a player gets, has, or loses can interact with energy counters.
2/9/2017 Energy counters aren’t mana. They don’t go away as steps, phases, and turns end, and effects that add mana “of any type” to your mana pool can’t give you energy counters.
2/9/2017 You can’t pay more energy counters than you have.
Posts Quoted:
Reply
Clear All Quotes
Back to Top