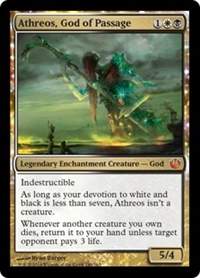 As long as your devotion to white and black is less than seven, Athreos isn't a creature.

Whenever another creature you own dies, return it to your hand unless target opponent pays 3 life.