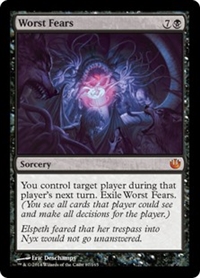 You control target player during that player's next turn. Exile Worst Fears. (You see all cards that player could see and make all decisions for the player.)