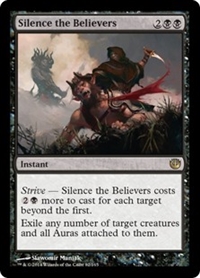 Strive — This spell costs 2B more to cast for each target beyond the first.

Exile any number of target creatures and all Auras attached to them.

4/26/2014 The creatures and Auras are exiled at the same time. Specifically, if an Aura is a permanent with bestow, it will be exiled. It won’t stop being an Aura and remain on the battlefield.
4/26/2014 You choose how many targets each spell with a strive ability has and what those targets are as you cast it. It’s legal to cast such a spell with no targets, although this is rarely a good idea. You can’t choose the same target more than once for a single strive spell.
4/26/2014 The mana cost and converted mana cost of strive spells don’t change no matter how many targets they have. Strive abilities affect only what you pay.
4/26/2014 If all of the spell’s targets are illegal when the spell tries to resolve, it won’t resolve and none of its effects will happen. If one or more of its targets are legal when it tries to resolve, the spell will resolve and affect only those legal targets. It will have no effect on any illegal targets.
4/26/2014 If such a spell is copied, and the effect that copies the spell allows a player to choose new targets for the copy, the number of targets can’t be changed. The player may change any number of the targets, including all of them or none of them. If, for one of the targets, the player can’t choose a new legal target, then it remains unchanged (even if the current target is illegal).
4/26/2014 If a spell or ability allows you to cast a strive spell without paying its mana cost, you must pay the additional costs for any targets beyond the first.
Posts Quoted:
Reply
Clear All Quotes
Back to Top