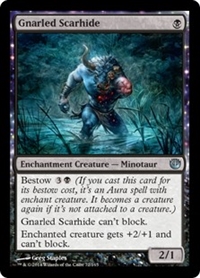 Bestow 3B (If you cast this card for its bestow cost, it's an Aura spell with enchant creature. It becomes a creature again if it's not attached to a creature.)

Enchanted creature gets +2/+1 and can't block.