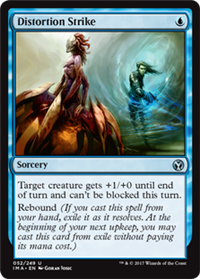 Target creature gets +1/+0 until end of turn and can't be blocked this turn.

6/15/2010 If a spell with rebound that you cast from your hand doesn’t resolve for any reason (due being countered by a spell like Cancel, or because all of its targets are illegal), rebound has no effect. The spell is simply put into your graveyard. You won’t get to cast it again next turn.
6/15/2010 If you cast a spell with rebound from anywhere other than your hand (such as from your graveyard due to Sins of the Past, from your library due to cascade, or from your opponent’s hand due to Sen Triplets), rebound won’t have any effect. If you do cast it from your hand, rebound will work regardless of whether you paid its mana cost (for example, if you cast it from your hand due to Maelstrom Archangel).
6/15/2010 If a replacement effect would cause a spell with rebound that you cast from your hand to be put somewhere else instead of your graveyard (such as Leyline of the Void might), you choose whether to apply the rebound effect or the other effect as the spell resolves.
6/15/2010 Rebound will have no effect on copies of spells because you don’t cast them from your hand.
6/15/2010 If you cast a spell with rebound from your hand and it resolves, it isn’t put into your graveyard. Rather, it’s exiled directly from the stack. Effects that care about cards being put into your graveyard won’t do anything.
6/15/2010 At the beginning of your upkeep, all delayed triggered abilities created by rebound effects trigger. You may handle them in any order. If you want to cast a card this way, you do so as part of the resolution of its delayed triggered ability. Timing restrictions based on the card’s type (if it’s a sorcery) are ignored. Other restrictions are not (such as the one from Rule of Law).
6/15/2010 If you are unable to cast a card from exile this way, or you choose not to, nothing happens when the delayed triggered ability resolves. The card remains exiled for the rest of the game, and you won’t get another chance to cast the card. The same is true if the ability is countered (due to Stifle, perhaps).
6/15/2010 If you cast a card from exile this way, it will go to your graveyard when it resolves, fails to resolve, or is countered. It won’t go back to exile.
6/15/2010 Distortion Strike doesn’t grant an ability to the targeted creature. Rather, it affects the game rules and states something that’s now true about that creature. The creature can’t be blocked even if it loses all abilities.
Posts Quoted:
Reply
Clear All Quotes
Back to Top