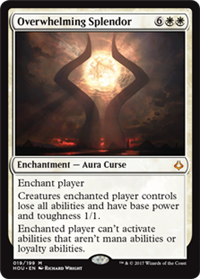 Creatures enchanted player controls lose all abilities and have base power and toughness 1/1.