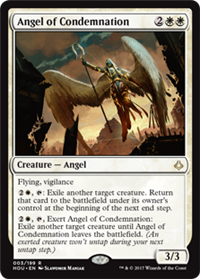 2W, T: Exile another target creature. Return that card to the battlefield under its owner's control at the beginning of the next end step.